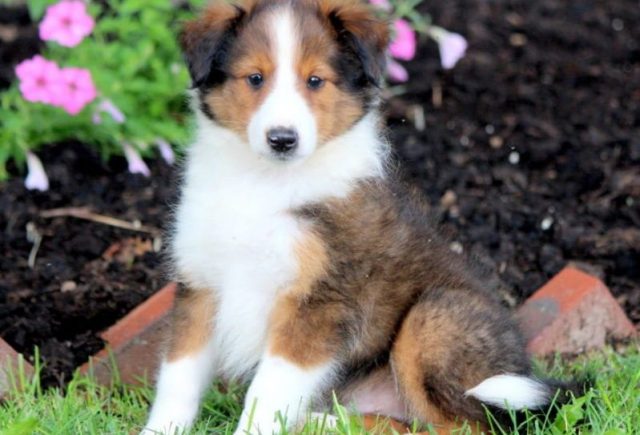 Looking for Shetland Sheepdog puppies for sale? As the name implies, this Scottish herder originated on the Shetland Islands. Probably a mix between the Scandinavian Spitz and Scottish Collie breeds, this farm dog was bred as an athletic companion to work with sheep and livestock.

Along the way, other dog breeds (notably Pomeranians) were interbred to make the dog smaller and more agile. By 1900, Scotch dog-lovers formalized bloodlines and began setting breed standards. Originally named the Shetland Collie, the breed was accepted by the British Kennel Club in 1909, but the name was changed to the Shetland Sheepdog in 1911 after some pressure from Collie breeders.

In the United States, the lovable Sheltie was registered by the American Kennel Club in 1911 and was grouped as Herding.

If you want to buy a Shetland Sheepdog puppy, it’s smart to do a little research first. These Scottish herders are loving, affectionate, loyal, and ready to please. They are bright, obedient, and easy to train. Shelties are also able to learn a vast number of verbal commands.

This breed loves families and is great with kids. They are so loyal that they are sometimes overly protective of children, but these tendencies can be well managed with gentle and consistent training.

Like many sheepdogs, they are energetic, athletic, and watchful, and they love to bark, which makes them good watchdogs. While Shelties are usually not aggressive, they are territorial and not fond of strangers.

When this dog is excited, he becomes an enthusiastic barker and often begins spinning. Daily, vigorous exercise and socialization will help manage this behavior.

If you’re considering adopting a Shetland Sheepdog puppy, make sure you understand this breed’s special health considerations. The life expectancy is between 12-14 years.

This breed is a relatively vigorous and healthy breed. Some issues to watch for are:

Give your dog plenty of daily outdoor exercise to help him stay calm and centered. All dog owners should keep their pets current on shots and vaccines and schedule regular vet checkups.

This breed has a double coat which keeps them warm even the cold, wet weather of the Scottish Highlands. The Sheltie’s topcoat is long, straight, and water repellant. The undercoat is short and thick.

Coat care is minimal. Brush once a week or so to keep the coat looking good, and bathe only when necessary. Trim the long hair enough to keep it off of the ground. If you live in a warm climate, you will need to brush more frequently to keep up with shedding.