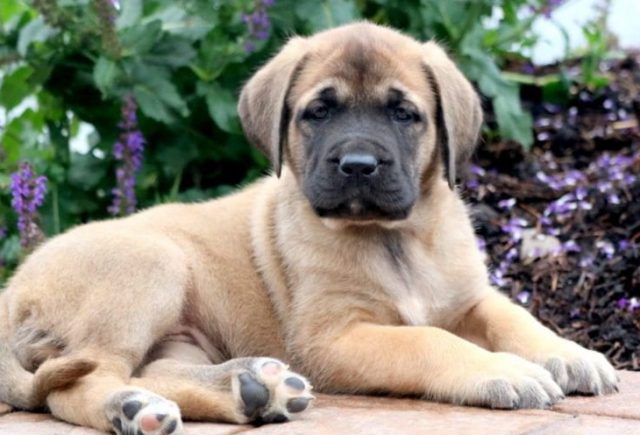 Looking for English Mastiff puppies for sale? These dogs are descended from the ancient Molosser. In Roman times, their ancestors were used to fight with lions, bulls, and bears. Later these intimidating dogs were used by landed gentry to guard against poachers.

The English Mastiff became popular with Americans in the 19th century. Despite an initial burst of enthusiasm and acceptance, the breed quickly fell out of favor in the United States. Although the AKC recognized them in 1885, the breed was virtually extinct in North America by 1910.

Like many European breeds, this large dog did not fare well during the World Wars. Rations and shortages meant that few people could get enough food to feed the large animals. By 1947, only a handful of English Mastiffs remained in Britain.

A few were shipped to the United States and became the foundation of the modern breed. Today these dignified dogs are bred on both sides of the pond. They are valued for their intelligence and even tempers. Although they do well with families and children, they are not recommended for toddlers because of their large size.

These dogs are a popular choice as faithful companions and guard dogs.

If you want to buy an English Mastiff, it’s smart to do a little research first. The breed is intelligent, loyal, and protective. Well-socialized Mastiffs will be calm and gentle. They love to be around their family and do well with their family’s children.

This dog is protective and usually suspicious of new people. While often seen sleeping or relaxing, these enormous dogs do best in spacious homes with large, fenced yards. These dogs need daily walks to stay fit, but they are not enthusiastic exercisers. They crave companionship and gets lonely or destructive if left alone for long periods.

To encourage a stable temperament, socialization is critical. Compared with other breeds, you’ll need to start training and socialization early, and you can expect to spend more time on the process. Time and effort will be required to ensure your pup stays calm and centered around other dogs and people. These intimidating dogs are popular choices for security, but they can quickly become combative, so it’s best to discourage watchfulness or aggression.

If you’re considering adopting an English Mastiff puppy, make sure you understand this breed’s special health considerations. Like many large, lovable dogs, these pups produce a lot of gas and drool. The average life span is 8-10 years.

While these dogs can pace or roam for hours, they aren’t runners. Daily walks are necessary to keep him fit but avoid running. Vigorous exercise can put excess strain on your Mastiff’s bones and joints, predisposing him to musculoskeletal issues later in life.

Some health issues to watch for in this breed are:

These deep-chested puppies are susceptible to Bloat, a sudden, life-threatening stomach condition. Consult your vet for the best ways to protect against Bloat.

Keep your canine companion up-to-date on shots and vaccinations, and make sure you schedule regular checkups with your veterinarian.

The Mastiff breed has a double coat. The outer coat is straight, short, and coarse while the undercoat is dense and lies close to the body. If acclimated, these dogs enjoy the cold but may overheat in warm weather, so watch for signs of heatstroke.

The coat is short and easy to groom. Weekly brushing should keep shedding under control.