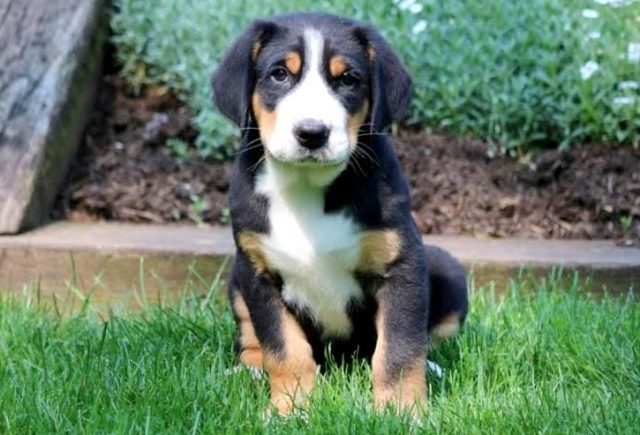 Looking for Greater Swiss Mountain Dog puppies for sale? This ancient breed has a lineage that can be traced as far back as Caesar’s invasion of Switzerland. Believed to be a descendant of Mastiffs and Saint Bernards, this majestic mountain dog is considered the oldest Swiss breed.

For hundreds of years, the Swissie was a true working dog. They were valued for their ability to guard farms, herd, and serve as handsome and faithful companions. Keeping large dogs was cheaper than maintaining horses, so they also became popular choices to pull small carts for brewers and butchers.

The Greater Swiss Mountain Dog was brought over to the States in 1968. The breed was so carefully and successfully bred, U.S. breeding stock was eventually exported to Europe to support re-population efforts.

They were fully registered by the American Kennel Club in 1995 and were grouped as Working.

If you want to buy a Greater Swiss Mountain Dog puppy, it’s smart to do a little research first. These large pups are big, friendly, and gentle, but they are also protective. Swissies were bred to be watchdogs and will bark at a stranger. However, they are not aggressive and are usually a lovable, loyal pet that does well with children.

Despite their good-natured reputation, they don’t always do well with cats and other pets. They can also be suspicious of other dogs.

While these over-sized pups have moderate exercise needs, they are also athletes that require daily activity to stay calm and centered. Pulling a wagon or sled for children is an ideal outlet for this pup, but always supervise. Short walks or romps in the yard are also good forms of exercise.

The Greater Swiss Mountain Dog is smart and loyal but requires a strong leader with strong dog-training skills. These dogs crave human companionship and often jump, lick, and try to cuddle. They develop more slowly than many dogs, making them puppy-like for many years. They are chewers and need gentle, consistent training to resist socks, children’s toys, and even pencils. Because they require an experienced handler to overcome these instincts, they may not be a good choice for a first-time dog owner.

If you’re considering adopting a Greater Swiss Mountain Dog puppy, make sure you understand this breed’s special health considerations. The average life expectancy is 10-12 years. This is a robust breed, but some health issues to watch for are:

For Swissies, and for any dog, stay up-to-date on shots and vaccinations, and schedule regular checkups with your vet.

Overall the coat is short, very thick, and dense. Not surprisingly, this Mountain Dog has an insulating double coat with a short outer coat and a thick undercoat that usually shows through at the neck.