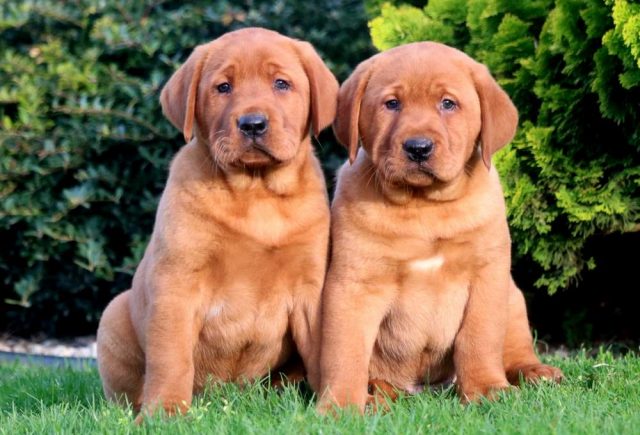 Looking for a Fox Red Labrador Retriever puppy for sale? Labs originated on the Island of Newfoundland. This breed began from a fishing dog known as the St. John’s Dog. In the 19th century, they began being trained as gun dogs for hunting and retrieving. The popularity of this sporting dog grew throughout the states after World War II and now can be seen in millions of homes.

At one time, almost all Labradors were black. Black is the breed’s genetically dominant color, but Labs can also be yellow, brown, red, cream, and white. However, for many years, humans would not breed Labs of other colors. Eventually, yellow became an acceptable variation.

In the early 20th century, Yellow Labradors were much a much darker butterscotch yellow. Over the latter half of the 20th century, breeders began selectively breeding some Labs for a red tone, and others for the lighter yellow we see in modern Yellow Labradors. In fact, in the eyes of the American Kennel Club, the Fox Red is still considered a variant of yellow.

The Lab was first recognized by the AKC in 1917 and grouped as Sporting.

If you want to buy a Red Fox Labrador Retriever puppy, it’s smart to do a little research first. These are pleasant dogs. Like all hunting dogs, these pups are energetic and athletic. They are loyal, intelligent, and easy to please, which makes them easy to train.

Labradors enjoy walks with their master and are also good swimmers. They enjoy doggy paddling in lakes, rivers, pools, and the beach. If they are not mentally and physically challenged, they become bored and can become destructive.

The Labrador gets along famously well with children. They are usually tolerant of climbing and tugging by small children and love to be spoiled. This confident yet tender pup loves being around people and is comfortable around strangers. Their overall demeanor and companionship make this breed one of the most popular breeds in America.

If you’re considering adopting a Red Fox Labrador Retriever puppy, make sure you understand this breed’s special health considerations. The average life span is between 10-12 years. One of the largest and most common health issues related to the Labrador Retriever is Hip Dysplasia.

Other health issues to watch for are:

Obesity is a common issue with Labs, so watch your dog’s diet and give him plenty of exercise. Take your dog in for regular vet checkups. With all breeds, it’s important to stay current on all shots and vaccinations.

The coat is short and dense. These dogs naturally have a slightly dry, oily coat that is also water-repellent. These water dogs won’t get cold when taking to water in the winter.

The coat is low maintenance. Brush you dog with a firm bristle brush 2-3 times a month to minimize shedding. Bathe only when needed.