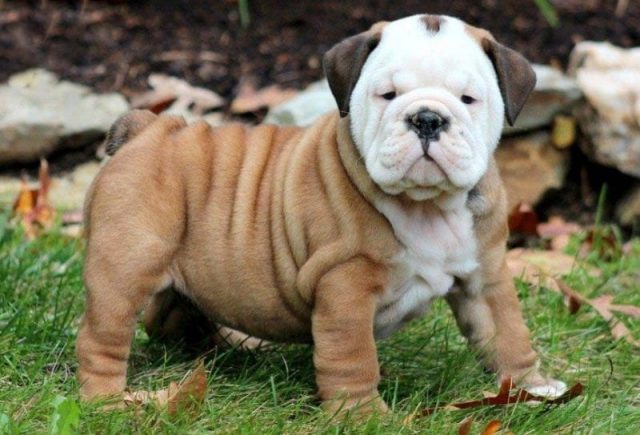 Looking for an English Bulldog puppy to bring home? This is a popular breed with a long history. Their forefathers were rough and tumble bulldogs bred to fight bulls and other dogs in the 1600’s and 1700’s. The group of modern dogs that came from these earlier fighters includes English Bulldogs, French Bulldogs, and Pit Bulldogs. As a group, these present-day pups are naturally gentle and good-natured.

The stout, compact dog is famous from his prominent jaw, short muzzle, determined gait, and loyal temperament. While these dogs look ferocious, they have a gentle and loving nature. The dog became a symbol of Great Britain and became especially popular during World War II when Americans noticed the breed’s resemblance to Winston Churchill. The English Bulldog gained recognition as the mascot for Mack Trucks and has been named as a mascot for dozens of high schools and universities.

This breed was recognized by the AKC in 1886 and grouped as Non-Sporting.

If you bring an English Bulldog puppy into your home, you’ll find they are friendly, docile and sociable. Although they look quite athletic, they are a low-energy breed which tires quickly and can become overheated in the heat. This dog gets along well with children and tends to get along well with other dogs.

While their appearance makes them a popular choice for people looking for intimidating companions, they are not natural watchdogs. This breed is not a barker and is generally friendly with strangers.

These heavy, compact pups want to be lap dogs and enjoy snuggling with their owners and families. They may get lonely or depressed if left on their own too often. Despite their macho appearance, they are loving, emotional dogs who crave the approval and attention of their master.

If you want to find an English Bulldog puppy for sale, it’s important to understand this breed’s special health considerations. The average life span of the breed is between 8 – 10 years. These pups tend to be gassy and drool. This pup can easily become overweight, and excess bulk will aggravate health issues, so monitor food and exercise. Check with your vet to determine the best weight for your pet.

English Bulldogs may get cherry eye, a protrusion of the inner eyelid. Other health issues are:

This is a brachycephalic breed. Their short snout and broad rib cage make it easy to become overheated, so keep your dog out of hot sun and keep him well-hydrated. These dogs can quickly become chilled, so jackets and booties are a good choice during cold-weather walks. Importantly, the English Bulldog can’t swim and should be kept away from deep water.

Use a clean cloth to gently daily wipe around eyes and in ears to minimize the risk of infections. It’s also important to use a clean, damp cloth to gently wipe between skin flaps or wrinkles once a week or more, to prevent skin irritation or infections.

All types of dogs should have regular vet checkups and stay current on all shots and vaccinations.

The short, smooth and finely textured coat is easy to maintain. Their hair lies flat and close to their body.

Before you buy your English Bulldog puppy, it’s smart to know about the coat and coat care. This breed does shed, so brushing 2-3 times a week is necessary. While you should avoid bathing this breed, it is essential to use a clean, damp cloth to clean between wrinkles to help prevent skin irritation and infection. 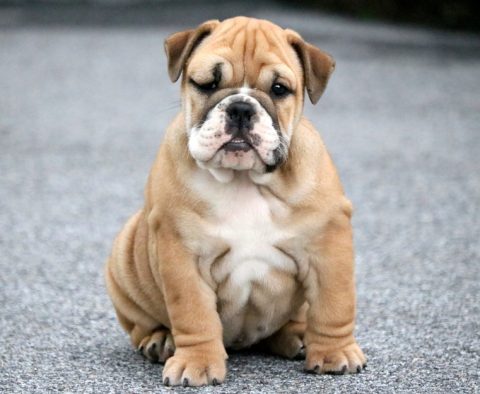