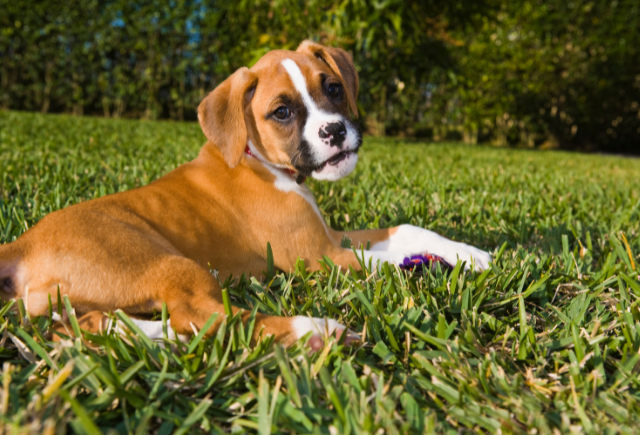 This sweet breed has the tough look of a guard dog, but in many ways, these pups have the heart of a lapdog breed. Here’s your chance to see Boxer puppies for sale and to learn all about this wonderful breed. While they may have a rough-and-tumble reputation, Boxers are actually a gentle, loving family breed. Athletic, courageous, and always up for excitement, boxer dogs offer a mix of aloof dignity and playfulness that win many an owner’s heart.

While you might not expect it, Boxers have excelled in formal dog shows, earning both blue ribbons and national prominence. In addition, Boxer puppies are selected as service dogs, helping people with special needs to live more independently.

The contemporary Boxer breed is a descendant of the ancient Roman Molossus – and has an interesting history. In the 1800’s, the Germans bred a Molossus variant called the Bullenbeisser, while the British bred their own Molossus variants into the English Bulldog. Eventually, the two varieties were interbred in Germany, resulting in the forefathers of today’s Boxer.

In 1895, the first breed club was established in Munich, and standards were formalized. This breed was first recognized by the American Kennel Club in 1904 and made part of the Working Group.

Average Based on 6 Reviews

Before you start looking for Boxer puppies for sale, it’s smart to do a little research first. With a name inspired by fighters in the ring, some people expect a Boxer to be aggressive or unfriendly. That couldn’t be further from the truth – at their core, Boxer dogs are very sweet! As is the case with many guard dog breeds, the owner must establish dominance early or their pup may try to take charge instead.

To ensure they are a harmonious part of the family, you’ll need to work a little harder with them to establish good traits early on that allows them to always put their best paw forward. For example, Boxer dogs need to be socialized and trained early to prevent aggression towards strangers or people they see as threats. It is advised to discipline gently but firmly and consistently.

When it comes to their physical demands, Boxer puppies, as well as adults, are high-energy dogs that need some vigorous outdoor exercise every day. In addition, they are known to be wanderers, so it’s important to keep them leashed or fenced in when you’re not around to supervise. Lastly, Boxers are also jumpers, so you may need training to curb their instincts to leap up on you, your family, or your guests.

What to Know about Boxer Breed Health

If you’re considering adopting a Boxer puppy, make sure you understand this breed’s individual health considerations. The average lifespan for Boxer dogs ranges from 10 to 12 years. While this tends to be a healthy line, especially when you work with a trusted Boxer breeder, there are some special considerations.

Make sure to watch out for these health issues in the Boxer breed:

Like all relatives of the Mastiff, these deep-chested puppies are susceptible to Bloat, a life-threatening stomach condition that often comes on suddenly.

At Pet Need Home Puppies, we only represent the best Boxer breeders. Our breeders not only offer a health guarantee but also provide exceptional homes for Boxer puppies that lead to healthy adult lives. As always, owners should keep their canine companions up-to-date on vaccinations and bring their pups in for regular checkups with their veterinarians.

The short, shiny coat is easy to maintain. Brush once a week to reduce shedding and to keep their coats bright.

Before you buy a Boxer puppy, get familiar with their grooming routine. Their short coats are easy to maintain and look fantastic when you do. We recommend that owners generally brush their coats once per week to reduce shedding and to keep their coats attractive and healthy.

While Boxer coats generally only need to be brushed once per week, it’s smart to brush them every day during shedding season to minimize hair in your home. In addition to that, cleaning out their ears once per week with a clean, damp cloth will reduce the risk of ear infections. If your Boxer has an abundance of wrinkles, they’ll need your attention, too. We recommend you wipe out the wrinkles once a week to reduce the chance of skin infections. As cute as it sounds, avoid baths as Boxer dogs simply don’t enjoy them.

Dog Breeds Similar to the Boxer